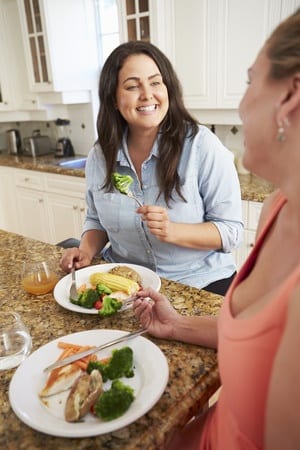 A fresh editorial reveals the argument of researchers emphasizing the need for eating healthy food. It is a much better step to prevent obesity as against merely counting calories. According to researchers, people bringing changes in diet experienced immediate improvement in the risk for heart disease, same as quitting smoking.

A study was conducted which comprised of 2000 heart disease survivors. Some of them were told to consume fish and they were minimally vulnerable to death during this study period compared to those advised with the opposite. With the former group, improvements were visible within a few months after diet change, expressed the editorial.

According to an editorial, the consumption of trans fat may increase the amount of inflammatory markers within weeks in an individual’s blood. It is a very unhealthy ingredient which is commonly used in processed or fast foods, not good for weight loss. Dr Aseem, a cardiologist working for Frimely Park Hospital of United Kingdom, revealed it.

Research outcome reveals that not all the calories created are equal. This editorial also observes that consumption of a soda can equaling 150 calories per day is related to heightened risk of diabetes. In contrast, the consumption of handful nuts regularly or of virgin olive oil in four tablespoons leads to lower risk of stroke and heart disease.

For reducing obesity, cardiovascular risk and similar diseases, says the editorial, focus should be more on dietary pattern centered upon food quality as against quantity. Researchers also pointed upon a study of 2013 suggesting dietary changes related to reductions in the risk of heart diseases. This is irrespective of variations in weight loss or gain for a person.

However, some of the experts agreed against the complete stopping of calorie counting. According to an experienced dietician, it is almost an exaggeration. Katherine Tallmadge suggests the need of both-concentration with the quality of eating and ensuring the calorie consumption is within the limits.

According to Tallmadge, weight loss has importance in terms of bringing health improvements. Overeating is the harbinger of multiple diseases. She believes that body fat solely could be toxic and it’s really crucial for people to have a decent weight. However, an excess over the suitable weight may be related to diabetes, cancer, heart disease, bad immune responses and others, as expressed by her.

As per the editorial, the choice of healthy food consumption needs to be turned easier. It may be pursued by policies like tax on sugary liquids along with subsidies leading to an increase in affordability of finer foods. It includes food items like nuts, vegetables, fruits and many others. The editorial expresses that the application of such policies can help in achieving significant reductions with hospital admissions and diseases. It may be visible even during the electoral period of several politicians.

Different theories support different claims and it was the same with this entire calorie count thing. School of thoughts arrive at conclusions with their own set of experiments and outcomes , as revealed by the aforementioned research study.